I’ve just got back from three days at the Secret Garden Party festival.

It was my first time camping at a festival. The festival experience was one which I had always suspected wouldn’t really suit me and so I never embraced it as a teenager. However, a couple of months ago, Julian from The Lost Lectures asked if I wanted to do my talk on why I like boring things, and I thought that maybe it would be a fun adventure, and so I said yes.

I wasn’t really sure what to expect from Secret Garden Party, but suspected it might be a bit like this:

As I sat on the train from King’s Cross, the two girls opposite me seemed to reinforce this idea. “Shall I text Jemima and ask if she’s packed an iPhone charger?” one of them asked. Later on, Jemima texted back. It turned out that although Jemima didn’t have her iPhone charger, fortunately Julia had packed hers. To make things worse, as we got off the train at Huntingdon, I saw that the girl who had asked about Jemima’s iPhone charger had a hula-hoop with her. These are not my people I realised.

Just as I was beginning to regret ever agreeing to all this, a group of three people in front of me asked if I wanted to share a cab with them. That was nice of them, I thought. We chatted during the short cab ride. One of them even offered me a Maynards Wine Gum, although she had opened the packet the wrong way up and that always bothers me so I declined (I didn’t tell her that was the reason). We arrived on site, and they went off to meet their friends or maybe just talk to someone who wasn’t me and so I went and queued for my wristband. The queue was slow-moving, but jolly, and the rain didn’t seem to put people off. It started to get a bit muddy though, so I changed my shoes: 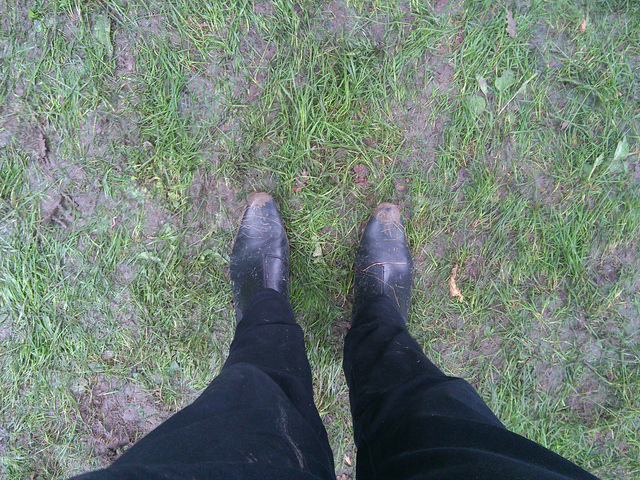 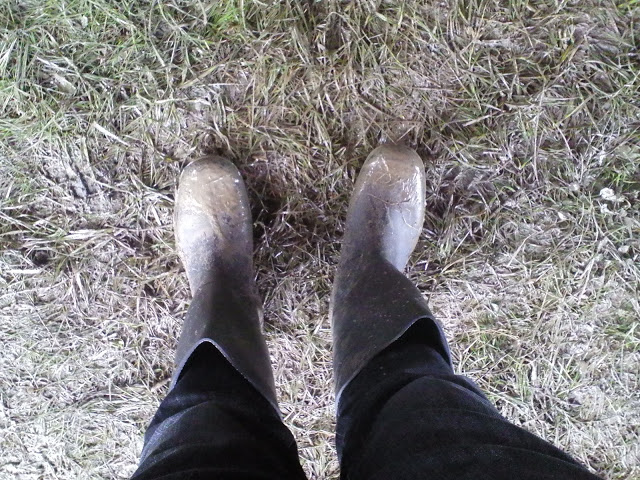 I think it was around half past five the next morning – as I lay in my tent; unable to sleep because of the sound of music, the sound of people and the sound of the rain – that it stopped being a “fun adventure” and instead became one of the most miserable experiences of my life.

Here is that moment captured on film:

By the morning, everything was covered in mud: 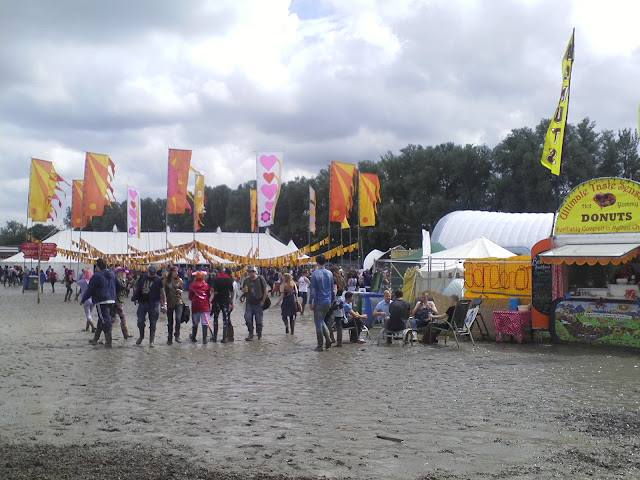 If ever there were an environment seemingly designed to break me as a person, this was it. I’d been there less than twenty-four hours and I was desperate to leave. In my notebook, I started a tally chart; marking off each hour as it passed until eventually I could return to the civilised world.

Why had I done this to myself, I wondered? My talk wasn’t until Saturday evening. I could have got the train early on Saturday afternoon, stayed for a few hours and come home the same evening. But no, here I was. Stuck in a fucking swamp for another two days. I began to hate myself. I trudged around, trying to find somewhere warm and dry to sit. At one point, I even sat and watched a performance poet do a piece about Hugh Grant giving evidence at the Leveson inquiry, because the only other option was to get up and go somewhere else.

I went to the “Revolution Bunker”. Here you could see how hippyish notions of personal liberation and meditation slide so easily into conspiracism: 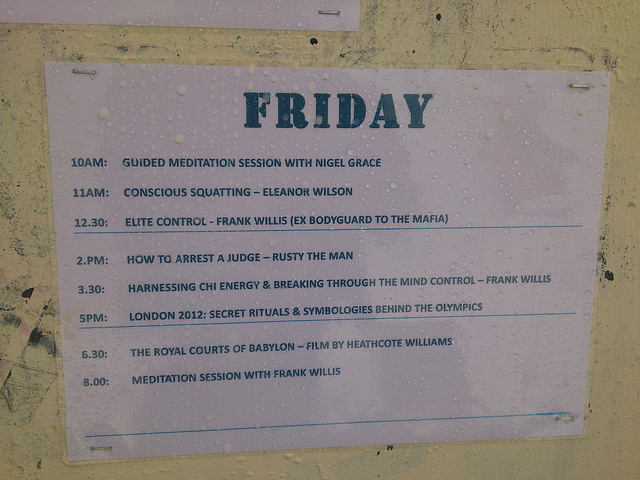 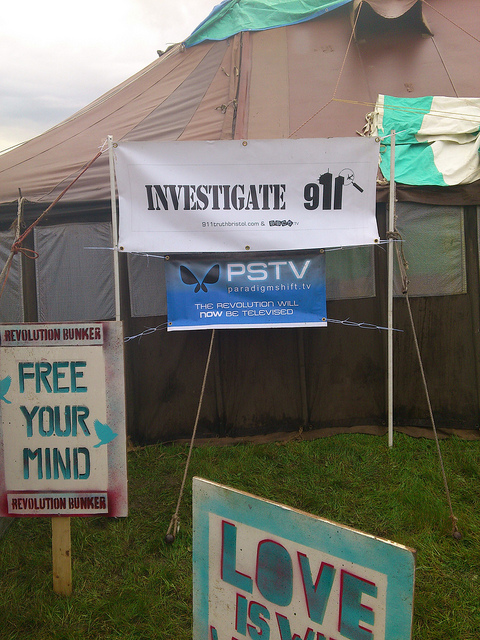 By Saturday, the rain had stopped and now the mud began to thicken. Each step became a challenge, the viscous mud weighing down each foot. But as the sun started to shine, you got the feeling that if weren’t for the mud, the place must look like a beautiful ramshackle village – all fairtrade coffee and vegan food stalls. But, watching people stagger around in the thick mud, the place seemed like some sort of post-apocalyptic disaster zone; a glimpse of what life would be like after a nuclear holocaust where only the middle-classes survived. 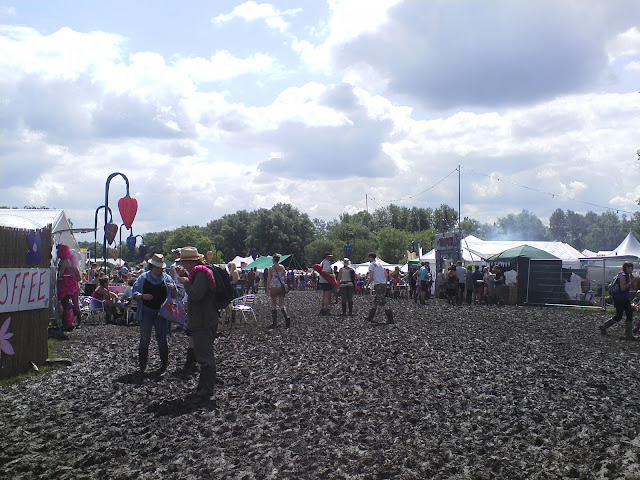 I know this all sounds incredibly ungrateful. Lots of people paid lots of money to go to Secret Garden Party and I get in for free and just complain about it. I’m sorry about that. It was really nice of Julian to invite me and there were moments I enjoyed and it was probably good for me as a person to have had this experience, even if just so that I know it’s something I don’t ever want to do again. And it’s always nice to see something really big get set on fire in the middle of a lake: 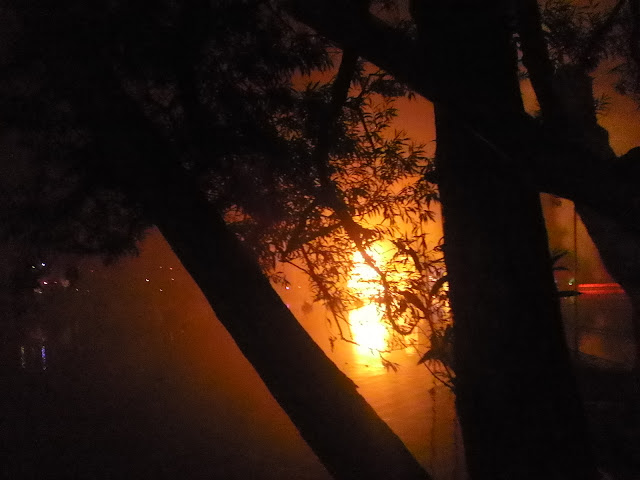 In fact, the Saturday and the Sunday were nice, and as I watched the enormous firework display at about one in the morning – surrounded by all sorts of people all sharing this moment, all sharing the same childlike grin which fireworks generate – I could absolutely understand why people come to festivals. But then I remember that moment at half past five on the Friday morning in the tent and how miserable I felt.

There’s a bit in the talk I did where I quote Georges Perec:

What we need to question is bricks, concrete, glass, our table manners, our utensils, our tools, the way we spend our time, our rhythms.

To question that which seems to have ceased forever to astonish us.

At the very least, three nights in a tent has made me realise how much I appreciate bricks, concrete and glass.